Warrel Dane: Dead Heart In A Dead World, In Memoriam… 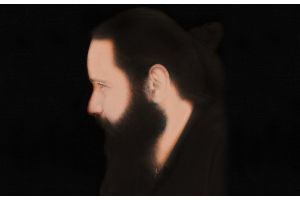 t was a December 2017 morning on the 13th of the month, when in the already cold winter atmosphere was added an information that froze the hearts of the fans of hard sound even more: Warrel Dane, the voice of NEVERMORE and SANCTUARY, was found dead in his bathtub in a hotel room in Brazil where he was on tour. The news erupted like lightning in the air, leaving open the mouths of all those who had traveled with his music. Nothing foreshadowed such an end for the 56-year-old Warrel, who had just completed the recording of his new personal album. Three years later, that day still seems like a nightmare.

Dane was born in Seattle on March 7, 1961. He trained for five years as an opera singer and used a very wide range of vocals, ranging from both low and very high notes. His first professional music step was with the Heavy / Power Metal band SERPENT'S KNIGHT, which he joined in 1983. Together with guitarist Brad Poland, bassist John Kimmel and drummer Michael Witkowski they released the album "Released From The Crypt".

He left in 1985 to form SANCTUARY with bassist Jim Sheppard, guitarists Sean Blosl and Lenny Rutledge and drummer Dave Budbill. At the end of 1987 they released the album "Refuge Denied" produced by Dave Mustaine (MEGADETH). After this record, Dane had a problem with his vocal cords which forced him to change the way he sang, setting aside the loud vocals and adding a dramatic style. This was followed by "Into The Mirror Black" and the live recorded EP "Into The Mirror Live" before the band disbanded due to pressure from their record company to pursue a more commercial sound.

Warrel then formed NEVERMORE with Jim Sheppard, guitarist Jeff Loomis and drummer Mark Arrington, who was later replaced by Van Williams. After the demo "Utopia", NEVERMORE recorded their self-titled album and toured in Europe and America. It was followed by "The Politics Of Ecstasy", "Dreaming Neon Black" and "Dead Heart In A Dead World", giving the band recognition among the heavy metal circles. Their sales soared and the albums "Enemies Of Reality" and "This Godless Endeavor" followed before the band finally made the Billboard charts with "The Obsidian Conspiracy" of 2010. NEVERMORE ceased active presence in 2011, after the departure of Jeff Loomis and Van Williams.

In June 2007, it was announced that Dane would enter the studio two months later to record his first solo album. The album was titled "Praises To The War Machine" and was recorded in collaboration with Peter Wichers and Matt Wicklund on guitars and bass, as well as Dirk Verbeuren on drums. The composition of the band changed along the way, with Thiago Oliveira and Johnny Moraes taking over the guitars, Fabio Carito the bass and Marcus Dotta the drums.

In the fall of 2017, it was announced that his second solo album entitled "Shadow Work" will be released in the first half of next year with producer Roy Z (BRUCE DICKINSON, HALFORD). Unfortunately, Warrel wasn’t there to watch it released.

The expressiveness of his voice, the theatricality in his stage presence, his synthetic skill, his unique tone, are just some of his characteristics that ranked him among the greats of the genre. His sudden death and the age he left us, ranked him among the "cursed" who "left" early.

In recent years, many great personalities of our favorite music "left" to become members of the "Heavenly" band. The huge R. J. Dio, the unique Lemmy, the highly influential Eddie Van Halen... no loss at any age someone "leaves" can be described as small, after all we are talking about personalities who go beyond any time frame. But Warrel "left" at a completely productive age, without having offered everything he could, without saying what he would have liked to have said. He leaves us his music as a legacy. "Shadow Work" was his last gift, the album that was to be his last and was released after his death.

His stigma in the field of hard sound is huge, his voice is unique, magical... one of the best that have ever passed, not only from his generation but also over time. His personality is unique, as are all his works. Special, original, full. The breath that NEVERMORE gave to metal, a necessary breath of life, taken out through the soul and the voice of the great absentee. His memory is eternal, as is our given love.